Bitcoin (BTC) heads into a new week after another weekend of major volatility — but this time, the way was down, not up.

As the market loses $7,000 — the most since the “vertical” price rises began — Cointelegraph presents five things which could keep it moving in the coming days.

Top on the list of topics among Bitcoiners will be the cryptocurrency’s sudden fall over Saturday and Sunday.

The drop is the most this year and since the Coronavirus caused a cross-asset crash in March 2020, but was widely predicted by analysts, who argued that Bitcoin had become overextended.

“#Bitcoin crashes >10%: The worst Bitcoin plunge since March is reminiscent of the last halving cycle in 2016/2017. The rally was followed by a slump of more than 50% in 2017,” financial commentator Holger Zschaepitz summarized in cautious words on Twitter. 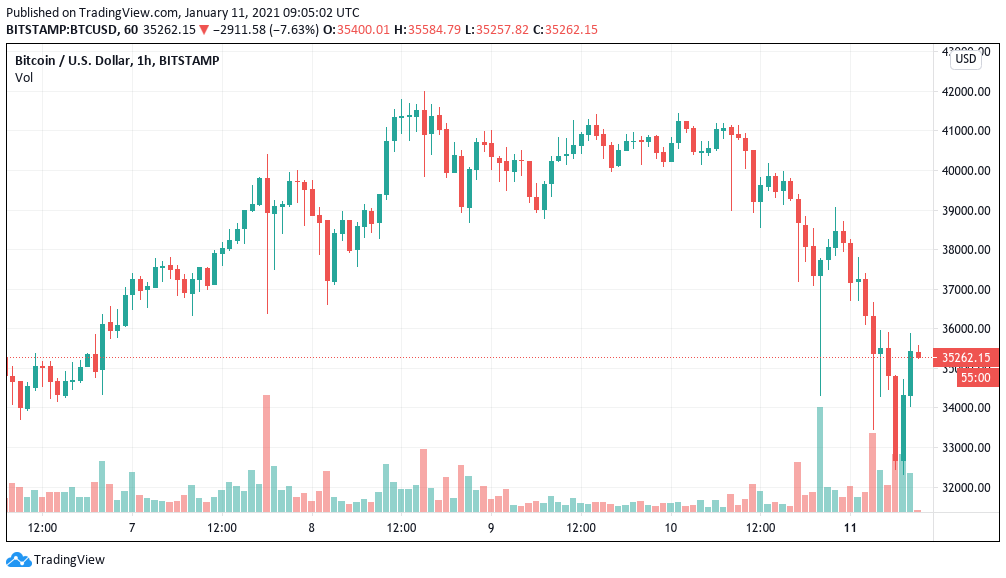 In fact, a 23% drop is nothing new for long-term Bitcoin hodlers, and the lack of more significant losses suggests that even above $30,000, buyer support remains strong.

“These and upcoming dips are the opportunities you where looking for during the #FOMO feelings you had at $40,000. Use them,” Cointelegraph Markets analyst Michaël van de Poppe meanwhile continued.

At press time, Bitcoin was already rebounding, with $35,000 swiftly following the lows. This was not enough for institutional Bitcoin buyer Guggenheim, however, with CIO Scott Minerd suddenly signalling that the fund would sell some of its BTC position.

“Bitcoin’s parabolic rise is unsustainable in the near term. Vulnerable to a setback,” he claimed on Monday.

“The target technical upside of $35,000 has been exceeded. Time to take some money off the table.”

Others noted the potential bargain for large-volume buyers.

“Institutions are really shaking out all the weak hands to acquire more #Bitcoin,” David Gokhshtein, founder of Gokhshtein Media, summarized about the current status quo.

In the United States, a potential bull sign for Bitcoin in the form of a massive $3 trillion stimulus program from the incoming Biden administration is being masked by a recent rebound in the strength of the dollar.

A classic inverse correlation for Bitcoin, the U.S. dollar currency index (DXY) continued its gains over recent days, heading back above the 90 mark after hitting its lowest levels since March 2018.

Last year often saw dollar weakening give Bitcoin a boost, at a time when other price relationships were steadily breaking down.

“The dollar is so extremely oversold, over-hated, and over-shorted that it all but has to rally for a while at some point soon,” Matt Maley, chief market strategist at Miller Tabak + Co., told Bloomberg.

“The dollar is getting very ripe for a tradable bounce — one that will last at least several weeks and maybe even a couple of months.” 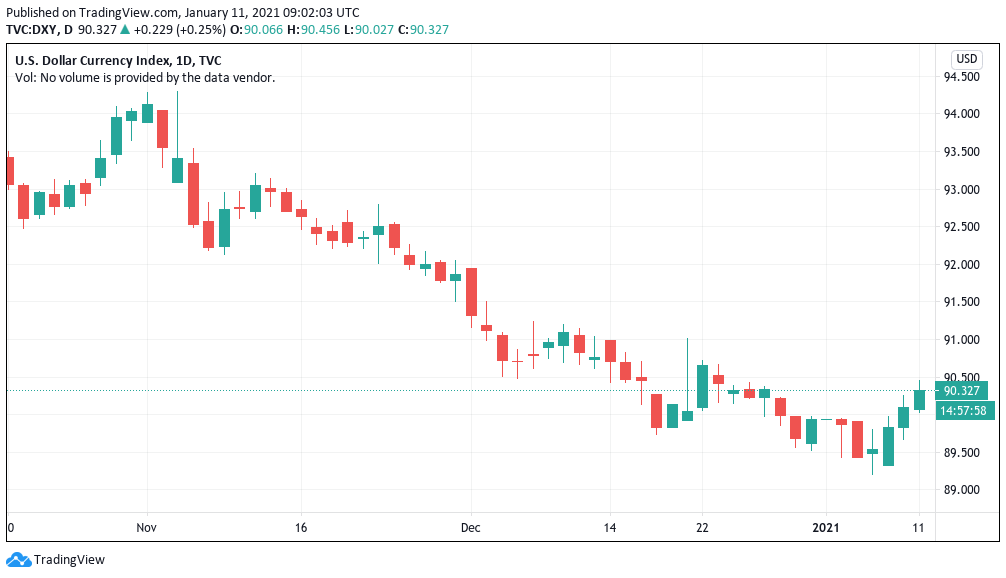 Looking to the long term, however, and it was clear for many this week that the U.S. was simply kicking its real economic hardship further down the road. Incoming president Joe Biden intends to give Americans stimulus checks worth $2,000 as part of a giant money printing exercise, which could be worth $3 trillion.

Should it pass, liquidity from the central bank will expand the most in a single instant since the Coronavirus pandemic began, and will take U.S. federal debt above $30 trillion for the first time in history.

“Time for Plan B,” Danny Scott, CEO of U.K. exchange CoinCorner, responded to the plans.

Equities traders are beginning to raise their hopes of incoming profits this week, thanks to the shock of recent events in the United States adding to markets’ existing gains.

On Monday, it was India’s turn in the spotlight, with stocks racing towards new all-time highs. As Cointelegraph reported, other markets are already at or near records of their own. Elsewhere in Asia and beyond, Hong Kong and South Korea made gains while Australia saw losses.

With U.S. futures down prior to Wall Street opening, a broadly mixed picture greeted market participants, with gold also struggling but oil advancing.

The extent of Bitcoin’s reliance on stock market movements is again in doubt as the weekend’s volatility looks nothing like the current macro environment. Since outperforming every major equity play except Tesla as markets rebounded from their crash last March, Bitcoin has increasingly forged its own path, unhindered by macro.

“I am expecting Bitcoin and tech stocks to double again in the next 6-9 months,” Immad Akhund, CEO of startup-focused bank Mercury, predicted over the weekend.

“It’s clear we are in an asset bubble fueled by fiscal stimulus, low interest rates and ironically higher disposable income in pandemic. Probably won’t end well but enjoy the ride on the way up!”

Akhund, like various others, added that his timeline coincided with the rollout of mass vaccination against Coronavirus, news of which has further fuelled stocks all-round rise in recent weeks.

One explanation for the Bitcoin price drop lies firmly within the Bitcoin network itself. A classic setup, miners appear to be selling holdings at significant rates once again.

According to data from on-chain monitoring resource CryptoQuant, those sales have now reached their highest since July 2019, even surpassing those which followed the latest block subsidy halving in May last year.

“Since December last year, they had been selling $BTC, but the correction was tiny due to institutional buying power,” he added in comments.

Cointelegraph in-house analyst Joseph Young had further thoughts. For him, Bitcoin at its all-time highs of $42,000 came at the end of a period during which the market had just overexerted itself. A period of taking stock — perhaps literally — was more than necessary.

“$2.7 billion was liquidated today,” he noted on Monday.

“Simple answer is the market was overleveraged, got greedy, continue to buy first dips below $39k.”

Bitcoin’s lower levels may end up being a gift to altcoin hodlers, who have eagerly awaited a lessening of the bull run’s intensity to allow other tokens breathing space.

As Cointelegraph’s Van de Poppe often notes, altcoins do not do well during parabolic episodes in Bitcoin, with their main performance occurring after Bitcoin has cooled down.

“The first level of the impulse wave was hit at $320 billion. As long as it remains above $225 billion, then the next run will bring the #altcoin capitalization towards new all-time highs.”

On Monday, however, it was clear that that pattern had yet to play out, with altcoins following Bitcoin downwards and even outpacing its losses.

Out of the top ten cryptocurrencies by market cap, many lost between 17% and 20% on the day, market leader Ether (ETH) nearing $1,000 support. Despite the drawdowns, many still retained solid gains on longer timeframes. In the case of the top ten, it was Cardano (ADA) in the lead overall, still up 27% versus a week ago.