Bitcoin (BTC) is almost unrecognizable as it starts the first working week of 2021, retaining $30,000 support and hitting astronomical new highs.

Hard to believe for hodlers, price action continues to wow as Monday gets underway, and attention is turning to what might be next.

Cointelegraph takes a look at five factors that investors might wish to monitor in the coming days in what is one of the most volatile Bitcoin trading markets in history.

As the first few days of the new year drew to a close, the Dow Jones and S&P 500 hit record highs — this despite the encroaching coronavirus sparking ever tighter lockdowns across the world.

For Bitcoiners, the Dow took on a different type of significance last week, with BTC/USD “flipping” its 30,600 points for the first time as it continued on to $34,000 and higher.

This week, analysts predict stocks to go higher still, part of a long-anticipated rebound which, much like last year, appears at odds with the situation on the ground.

“A strong vaccine-led recovery in global growth will provide a large boost to cyclical assets, including commodities, cyclical equity sectors and emerging markets,” Goldman Sachs told Bloomberg as part of its 2021 outlook survey.

“However, the path may be tricky as the market balances spot growth weakness with a forward outlook that is more supportive.”

Not everyone was so bullish. Fidelity, the asset manager well known for its pioneering pro-Bitcoin stance, countered:

“2021 is likely to be about capturing relative opportunities as investors price in economic and virus-related developments.” 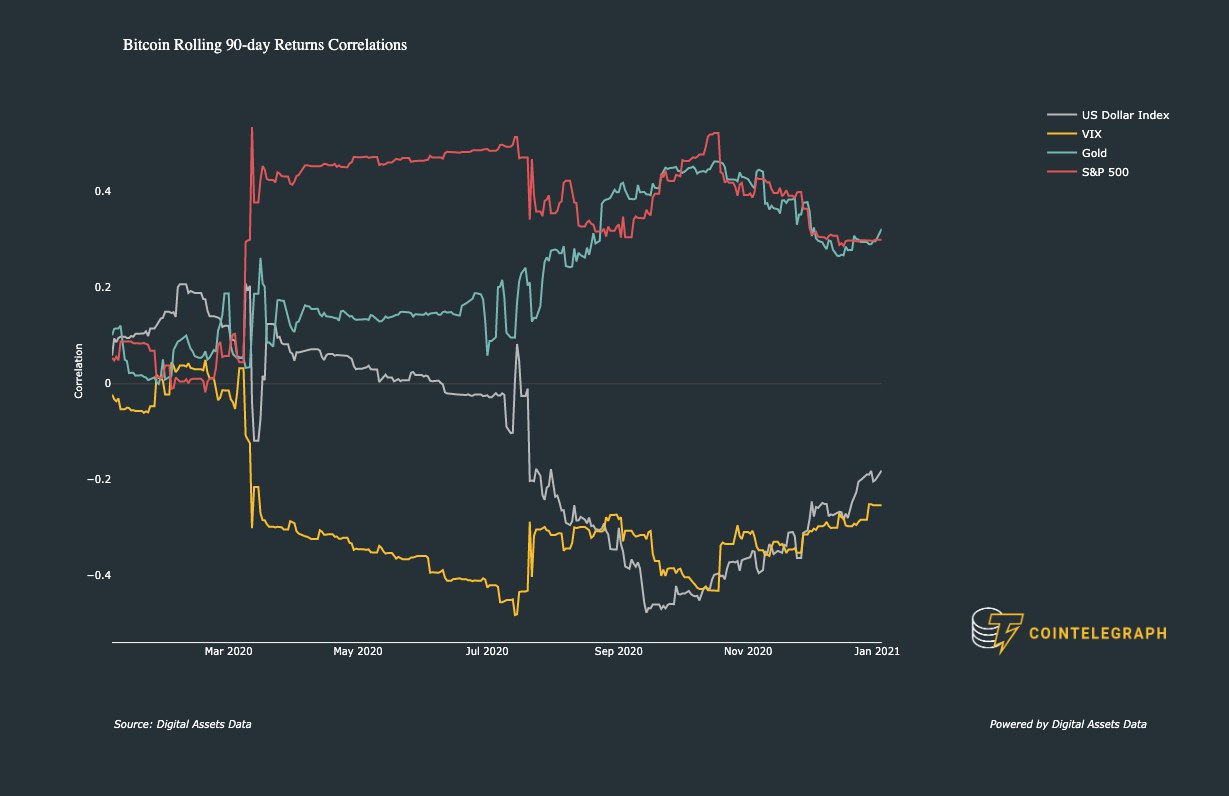 After clinching $34,800 over the weekend, Bitcoin is looking decidedly in need of a consolidatory period as the week gets underway.

The highs, which still seem unreal to many investors, have plenty of hurdles to overcome in order to defend themselves and not allow Bitcoin to cave to the bears. 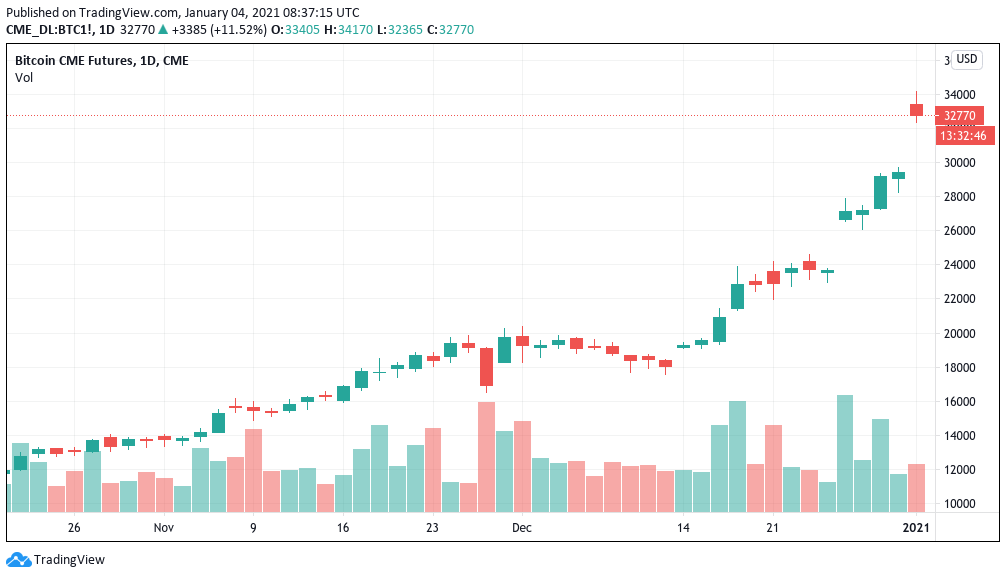 As Cointelegraph has previously explained, “gaps” in futures are the differences in price between the end of futures trading on a Friday and the start on the following Monday. When heavy volatility hits in between, the resulting void often forms a short-term price target.

In this case, Bitcoin thus has an impetus to retest levels at just below $30,000. Should it wish to fill lower gaps which remain untested, the market may dip further still — the pit of last weekend’s gap lies at $23,800.

While previous months saw many a gap get filled, however, the idea of a $24,000 Bitcoin is now a remote possibility, according to popular statistician Willy Woo.

$20,000 itself forms a zone of interest for those studying gaps, with two large vacuums in futures markets still open below that significant level.

It’s all change for the better among Bitcoin’s core fundamentals, meanwhile. After a month of small decreases, network difficulty is once again set to push upwards to hit new record highs.

At the next automated readjustment later this week, difficulty is currently expected to increase by just over 5%.

The past two readjustments saw drops of 2.5% and 0.4% respectively, an interesting contrast to the rapid increases in spot price seen at the same time.

Difficulty is arguably Bitcoin’s most important technical aspect when it comes to its status as “hard” money, allowing the network essentially to govern itself and stay secure regardless of miner participation or price action.

Hash rate refers to the computing power dedicated to participating in the Bitcoin network, and current data suggests that participation and desire to keep the network secure is stronger than ever. 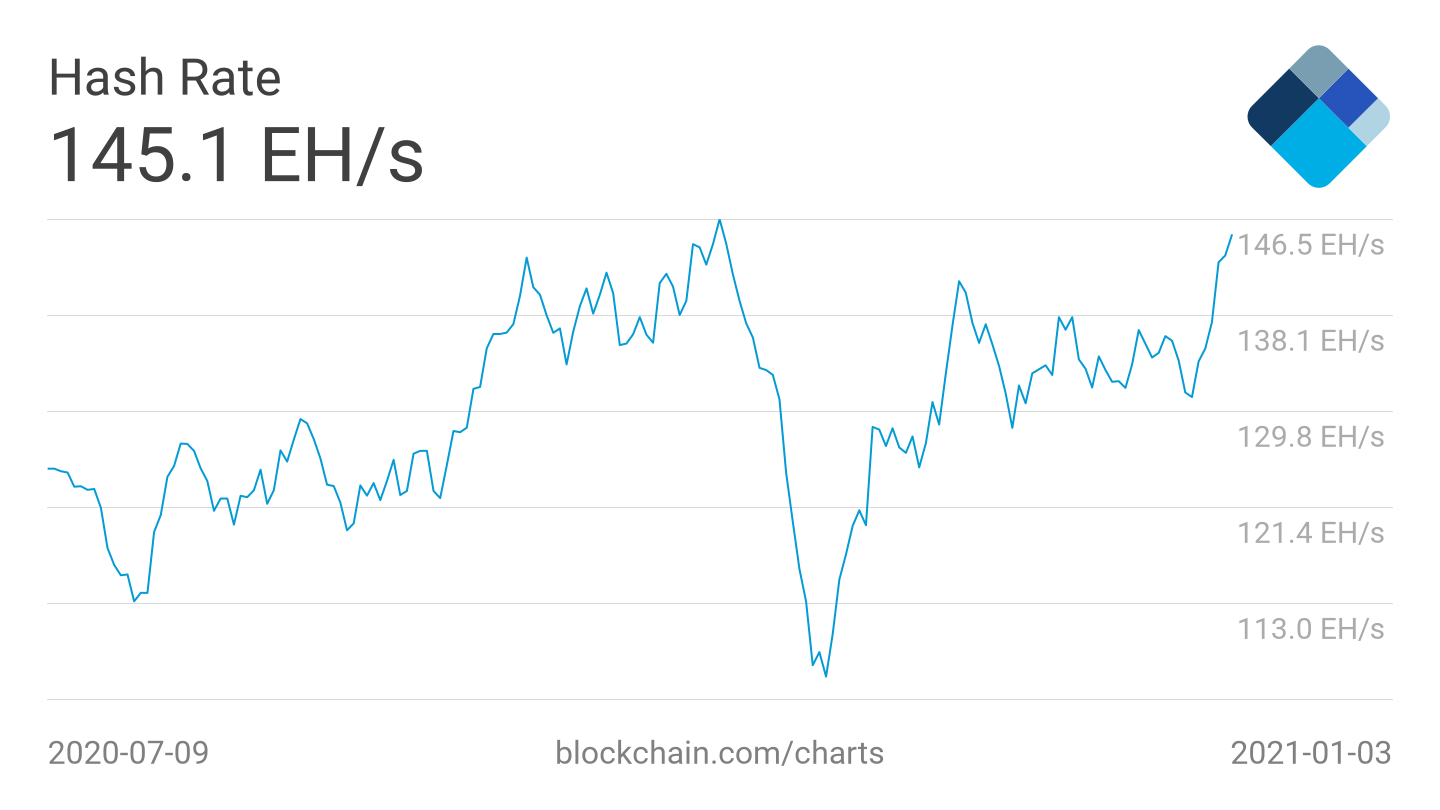 Ether returns to $1,000 after three years

Perhaps the most telling sign when it comes to price trajectory is coming from within cryptocurrency itself.

While Bitcoin alone is impressive, this weekend ended with an even more conspicuous surge in altcoins, and specifically Ether (ETH). The largest altcoin is up over 30% in the past 24 hours alone, bringing its weekly gains above 50%.

As Cointelegraph reported, Sunday saw it clinch a key level against BTC, and in dollar terms, the largest altcoin is back in four figures for the first time in three years.

In the words of Cointelegraph Markets analyst Michaël van de Poppe, such a move suggests that a return of “altseason” — a period of rapid rises across altcoin markets while Bitcoin consolidates — has de facto arrived.

“Another week that Ethereum will close above the crucial threshold on the BTC pair,” he commented late Sunday.

“Most likely some sideways continuation before upwards continuation towards a new higher high. 2021 is looking bright for Ethereum.”

The token’s success was long in forming. Ether spent much of 2020 as the butt of jokes among Bitcoiners, as even the release of its long-awaited Ethereum 2.0 protocol transformation failed to have a noticeable impact on price.

Nonetheless, the altcoin was in fact the best investment of the year, outperforming Bitcoin versus its March lows when it traded at just $113 — one tenth of current levels. 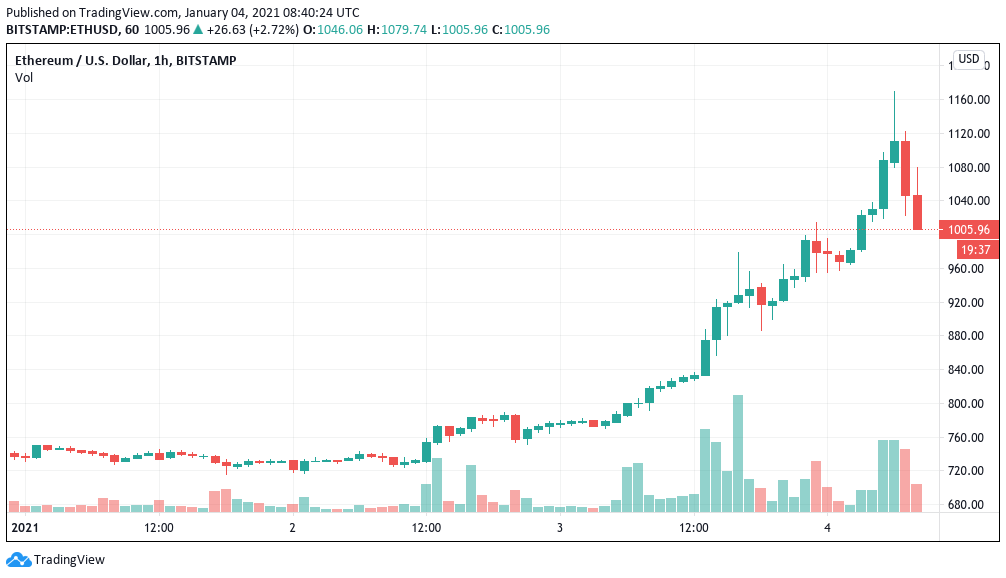 If Ether is dictating the reemergence of altcoins, such as THETA, for example, it is already evident if one examines the state of Bitcoin’s market dominance.

As ETH/USD surged overnight on Sunday, the share of the total cryptocurrency market cap owned by Bitcoin began to fall dramatically. Against 73.5% earlier on Sunday, press-time levels are more like 68.3%, data shows.

That kind of behavior is a classic indicator of altseason, and will remind longtime hodlers of the events of January 2018. At the time, Bitcoin was coming down from highs of near $20,000, but altcoins exploded, ETH/USD hitting current all-time highs of $1,500.

Given that Bitcoin has managed to crush its own record from 2017, it is that pattern of behavior which is fuelling speculation that Ether and other altcoins will go much higher in the short term.

“Bitcoin and ether ETH are already the biggest hits of 2021,” Tyler Winklevoss, co-founder of exchange Gemini, summarized to Twitter followers.

It’s not just Ether. Litecoin (LTC), the fourth-largest cryptocurrency by market cap, has added 15% since Sunday, once more coming within a hair of flipping XRP to take the number three spot.

XRP, beset by problems thanks to legal action against Ripple, has still managed to put in some form of progress, rising by almost 10% overnight to reclaim $0.24.